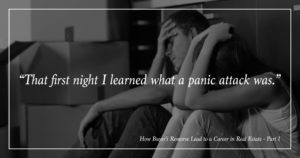 This is the story of my first house. My, “disaster of a purchase” Part 1

In early 2003 I was a college graduate living in an apartment in Los Angeles. Today, I’m the owner at redT Homes, a brokerage company based in Denver, CO.

This is the story of how the buyer’s remorse I experienced with my first home lead to my Denver real estate career.

At the time (16 years ago) I was working in sales for the Kor Hotel Group. I was only a few years out of college, and was doing what everyone does when they first move out – renting. It seemed like the obvious thing to do for a variety of reasons; all of my friends were renting, I wasn’t making much money, and the notion of home buying just seemed like something for aged adults, or parents. My parents were still living in the house they had purchased in the 80’s; which was only the second home they had ever purchased in their lifetime. They had guided me through plenty, but they themselves weren’t all that knowledgeable when it came to real estate.

If each dollar I didn’t have was a reason not to buy, then I felt like I had about 50,000 reasons to be renting. At the time, my paycheck really only covered my living expenses, and I knew nothing about buying a home. I was operating under the assumption that buying a house meant needing a 20% downpayment. I wasn’t saving much money, and 20% seemed like a far cry from anything I thought I’d have in the foreseeable future; therefore, I was Nathan Adams – an L.A renter.

A friend of mine named Matt, had recently started working as a mortgage broker, and he disclosed a few strategies and cleared up more than a few industry misconceptions of mine. I say “misconceptions” because that is exactly what they were. I was misinformed, and am fortunate that I had a knowledgeable friend that could teach me what I didn’t know. Please don’t hesitate to share this story or contact me directly, because the reality is that too many people remain misinformed.

Millennials are especially misguided as to their potential of being home owners.

A few of Matt’s tips in particular especially resonated with me and peaked my interest:

A 5 percent downpayment was a tremendous leap in the right direction, but it was still too large an amount for me to cover on my own, and my 401K was – let’s call it, “non-substantial”. My family was my last option. Nervously, I went to my parents with a prepared sales pitch and a documented strategy for paying them back. They ultimately agreed to provide a “gift” that would be repaid to them just like a loan and with interest. Now, with a pre-qualification letter and the money needed for a downpayment, I went house hunting!

I didn’t qualify for a big number – $250K. And by L.A standards that wasn’t much to spend, even in 2003. As a result, there were only 5 places available within my budget. Only one of the five did I even moderately like, but I was too late to make an offer – it went under contract in less than a day. Knowing how fast I had to act and how little there was to choose from, I decided to make an offer on my second choice. My “second choice” was a badly beat up 800 square foot townhome; a real beauty for a silver medal. The house was over 30 years old (but didn’t look a day over 75) and even came with pets! – we found mice at inspection. The house needed work to say the least, but about 40 days later I was the homeowner of a $242,500 renovation project.

Up until then I was known as the guy that wasn’t bothered by much, but that first night was when I learned what a panic attack was.

My parents decided a short time after I decided to buy that they were going to move from Pennsylvania to Phoenix, Arizona. They had decided to sell their 2,000+ square foot house I grew up in, and were buying a brand new 4 bedroom home with a pool for $210,000.

I paid $32,500 more for a beat up shack with mice than my parents spent for a brand new house with a swimming pool.

“I hate this neighborhood.”

“What kind of mistake did I just make?”

“I can hear my neighbors through the walls.”

“Wait until my parents see what I did with their money.”

“What the hell are my neighbors doing?!.”

These were the thoughts running through my head keeping me awake in sweat that night. I was learning firsthand what buyer’s remorse was and it didn’t feel good.

Read Part 2 and learn what happened 366 days after I bought my first home – the purchase I initially believed to be the worst decision of my life.