Two months into 2019 and the Denver Real Estate Market is starting to heat back up!

Today, we want to get back to basics and look at the foundation of our market: Supply and Demand. 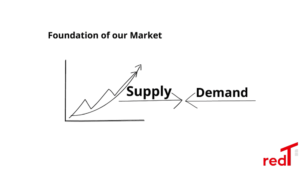 In the fall of 2018, Year over Year inventory levels started to rise throughout Denver county.

By December, those levels were a full 51.77% higher than they had been the year prior.

As the new year progresses, we’re seeing this trend continue, with January and February inventory levels both over 50% higher than last year.

Historically, Inventory levels have fluctuated seasonally, but our new norm is to see levels that stabilize around 50% above the previous year. 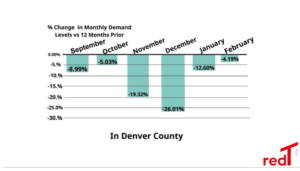 Year over Year change in demand has been down since September 2018, and bottomed out in December 2018. Demand levels have been increasing since. February demand was only down 4.19%, which means just 36 less homes were sold in February of 2019 than were in February 2018. 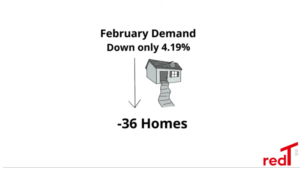 One final statistic that proves that the market is heating back up is “Months of inventory”. This is a combined statistic measuring how long any existing inventory would last if no new homes were listed for sale. January 2019 saw 2.6 months of inventory before falling back down to 2.13 months in February. 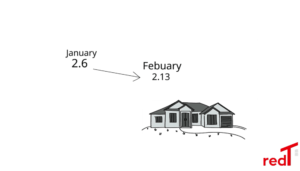 If this trend of increasing demand and stabilizing inventory continues, we should see a shift back to a demand-driven market with a shrinking “Months of Inventory” and increasing price appreciation.